Huawei has released the Freelace Pro, one of the only neckband-style wireless Bluetooth audio earphones officially released by Huawei locally in the past year. It features quite a functional design, but does it have all the bells and whistles to be a daily driver? Here’s our full review.

The device features an all-rubber material, save for the two areas on each side where metal was used. The buttons are all polycarbonate. I’m using a cheap neckband Bluetooth earphones for listening to music, so this isn’t really much of a difference and is in fact easier to use. The volume/next/previous and play/pause buttons are well-defined, and the power button is at the side.

The wires leading to the earbuds feels sturdy and is just sized right. The band is flexible, and the wires never tangle.

One thing I like about this is the inclusion of a Type-C connector as the charger. While it’s still uncommon to find a charging port that accepts this port straightly, the idea of having a female Type-C to USB to augment that issue is very welcome.

It’s also great that this offers a magnetic clamp that attaches the buds to each other and is beneficial if you’re walking around and not using them, leaving them in your neck. They’re very secure and do not break apart. That also helps when you need to pause for something as clamping together turns the device off momentarily, thereby effectively stopping whatever you’re listening on.

The buds are heavier than my usual pair, but by no means heavy to mean that it’s affecting the way I listen. It’s not something to be complained about, as it doesn’t fall off and feels very secure in my ears with the wingtip also helping on that. They are comfortable and do not irritate me when I used it for the first time.

This audio gear does boast its Active Noise Canceling feature, which meant that you’ll not hear anything aside from what’s being blasted on its earbuds. There are three modes (Awareness, Noise Cancellation, and Off), by default, in which you can interchange easily by pressing and holding the left bud area. The awareness mode, if you need to have a chat with someone without taking off your earphones, needs to go quite a cycle of tap-and-holds if you don’t have the app in your hands.

I’ve been using this as my daily music gear whenever I go to the office these past couple of months and I am really impressed with it in terms of noise cancellation — low-frequency noises such MRT-3’s rail tracks, the honks at EDSA from afar, the chatter of people lined up in the queue for the UV Express, or even the driver beside me asking me for change were all suppressed easily. Can’t say the same for someone literally shouting beside me, or a honk of a bus just one meter away, or a siren of a fire truck, but these are rare instances in my environment.

Sound-wise, they’re really decent with more pronounced mids, powerful and rich soundstage, well-reproduced instruments, and bass is felt really well. I’m no audio junkie but I think casual listeners will definitely like how the audio felt not muddled anywhere with this.

It also features IP55 water and dust resistance, which should be enough for daily commute or even exercising around. Perspiration is easy to clean off the device. Latency is also not an issue, audio produced on the earphones is in sync with videos I watch from YouTube, and is also good for gaming.

The Freelace Pro also supports Dual mode audio, meaning someone can listen in whatever you are tuned in using wired earphones or the phone speaker while you’re hooked up with it. That was helpful in times such as listening to meetings or instructional notes without disturbing others.

You can also change how your Freelace works with the Huawei AILife app including changing how the buttons work, toggle which noise cancellation modes are available, as well as see more information including battery life. Speaking of that, the Freelace Pro claims up to 24 hours of battery life in one single charge.

It’s not really that long, but it’s faring better than other neckband-style earphones I have with an average of 20 to 21 hours of battery life with activities including listening to music, watching videos, and using it as a handsfree speaker and microphone whenever I’m doing something on my PC. Charging it back to 100% is at around 50mins to an hour, which isn’t bad considering the long battery life you’ll have with it.

The Huawei Freelace Pro is a great wireless audio product you can have. It's one audio gear with great sound and even better battery life for PHP 4,499. This only proves that neckband-style audio gear is still great and is definitely here to stay and slay.
Buy at Huawei Online Store

Red Bull Mobile Esports Open is coming to the Philippines 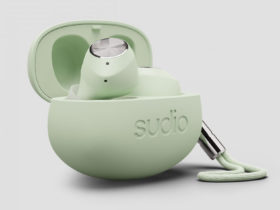 Sudio T2 TWS Earphones with ANC: Price, Features, Where to buy in the Philippines